Madison County was originally inhabited by a people who existed prior to the American Indian. Signs of these people, often called the Moundbuilders, may be found in many sectors of the country. They are called Indian Mounds and the one most often seen by the general public is at Round Hill, near Kirksville.

In the middle 1950's an outdoor drama was staged near Berea at a theater called Indian Fort. This called attention to Indian Fort Mountain whose summit was fortified by these pre-Indian people.

A reconnaissance survey was made of this area in 1910 and a scientific exploration was carried out in 1922 by Dr. Wilbur G. Burroughs, geologist at Berea College. Prehistoric graves were discovered in small caves in the cliffs facing the sun. Other prehistoric stone barricades were found nearby at Robe's Mountain and Basin Mountain. A few miles west of Indian Fort Mountain a mound containing copper armor plates was discovered. These relics may be seen by anyone willing to climb the mountain.

A number of mounds were discovered in the Kirksville area. The Round Hill mounds sit within the village limits. It was explored in the 1930's and was found to be a burial mound. Other mounds have been found on the Turley Noland farm and the James Bogie farm. French Tipton, who was editor of the Richmond Climax, reported mounds all over Madison County in his 19th century writings, including ones on the Armstrong-Gilbert farm and near Million.

In July 1897 an exploration of a mound took place near Moberly under the direction of Col. Bennett H. Young. Hon. R. O. Moberly, county judge until 1961, witnessed the exploration of the mound which was on his uncle's farm (John Moberly). The mound was ninety feet in diameter and although it had been cultivated all around, still had a height of twelve feet. The mound was demolished, yielding several skeletons, two copper beads and several flints.

These discoveries of the not so long ago thus reveal that Madison County is not only the depository of much history, but also of much pre-history. 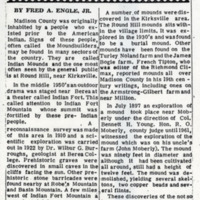