Clothing Prices in Richmond in 1875

Clothing Prices in Richmond in 1875

When folks get ready to buy their new spring clothes, they usually do some "shopping around" at several stores, getting a notion of the quality and prices before they buy.

Residents of Richmond back in 1875 apparently were no different, judging from the advertisements in the newspapers of that year. These old newspaper ads indicate that some strong competition existed among three Main Street clothing stores. The newly opened Great Louisville Branch Store, was operated by Messrs. Streng and Thalhelmer. The New York Store, operated by Mr. M. Pragheimer, was located next door to the J. F. Miller Building on Main Street opposite the Court House. The Kentucky Store, next door to "Irvine &amp; Walker's Bank" (now the State Bank &amp; Trust Co.), was operated by Mr. Sam Kaufman. Other Richmond stores which sold clothing about that time were Greenwald's Eagle Store, S.F. Moberly, and D.M. Bright.

The clothes in these stores must have looked rather ordinary by today's merchandising standards. Coats and suits--mostly black and a few dull gray and brown ones--were hung on racks, and most other goods were stacked on shelves against the wall, or in large, heavy showcases. Since there were no electric lights, the interiors of the stores were quite dark even in the middle of the day.

The clothing prices of 1875 appear quite amusing to us some 94 years later. The New York Store advertised men's "fine all-wool suits" for $10 and $15, while the Kentucky Store offered "a good suit of clothes" for $5, and "a nice suit" (all wool) for $8. As a part of their grand opening at their Great Louisville Branch Store Streng and Thalheimer priced their "good suits" at $6 and $8.

In seeking a new pair of shoes to go with his new suit, the Richmond gentlemen of 1875 found a price range of $1.25 to $3. If he was a "real sport," for $2.50 he could get a pair of "Side Lace Morocco Shoes" from Streng and Thalheimer. The lady of that day could purchase her shoes for $1.25 to $2.50 a pair, and if the kiddies needed shoes, they could be had for 25 cents to 75 cents. For the really rough boys who were hard on shoes, the Great Louisville Branch Store offered something that a lot of present-day parents might like: "children's copper-toed shoes 50 cents a pair."

Not much was offered in the ladies' ready-to-wear field, for at that time most of the ladies either made their own clothes or had them made by some local seamstress. To this end, these local stores offered yard goods among which were the best qualities of calico at 6 1/2 to 10 cents a yard. Those who liked the ready-made could get such items as "balmoral skirts" which came within an inch or two of the floor for $1 to $1.50. Breakfast shawls were also popular, judging from the fact that several stores advertised them, at 25 cents to 50 cents each.

Of course, if all this shopping left a person weary and ill he could go down the street to Ballard Francis and White's Drug Store where he could get a bottle of Ballard's Snow Liniment which "positively cures rheumatism, neuralgia, lame back, old sores, wounds, sprains, bruises, etc." - all for 25 cents a bottle! 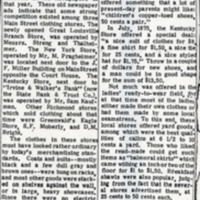