With the building of a new shopping center at the intersection of U.S. 25 South and the Eastern By-Pass, many people will have occasion to view at close hand one of Madison County's most famous mansions--Woodlawn. We are indebted to Prof. W.K. Keene, retired Eastern English professor for much of our knowledge of the old Madison County homes.

Woodlawn was built in 1822 by Col. William Rodes. It has beautifully carved woodwork, a center hall with two rooms on either side and two wings beyond. There are two rooms on the second floor. Mrs. Rodes was a daughter of Gen. Green Clay and she and Col. Rodes celebrated their golden wedding anniversary in this home in 1872. Woodlawn in disguise, appears in one of the novels of John Fox Jr. Col. Rodes was instrumental in the building of Madison County's beautiful courthouse and in the graceful drives laid out in the Richmond Cemetery.

At one time Woodlawn was the home of a life size portrait of General Lafayette, painted by Matthew T. Jouett when the Frenchman visited the United States in 1824. It was sold in 1900 in New York City for $3,000. The wallpaper in the front parlor was sold in 1923 for $6,000. It was restored and now is on the walls of a private home in New York City. Photographs of the wallpaper are in the Eastern Museum here in Richmond.

During the Civil War, the Battle of Richmond, Ky., was fought on Saturday Aug. 30, 1862. Both Union and Confederate troops encamped on the grounds of Woodlawn. The Confederate forces watered at the great spring on the ground and the water was not exhausted. The stone spring-house may still be seen from the road. On the day after the battle, the 11th Kentucky Cavalry regiment, C.S.A., was raised in Madison County and some 800 men gathered for a barbecue near Woodlawn again drinking from the ever flowing spring.

The beautiful old mansion, whose walls could tell so much about the last 147 years, is presently owned by the Burnam family. 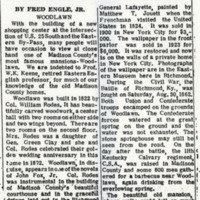