Since the old Federal Building has recently been purchased by the city and is presently being refurnished as a city hall, it will probably be of interest to trace the way in which this tall stone structure came to be built.

In 1890 former Governor James B. McCreary, serving as congressman from this district, received a petition which had been circulated by O.H. Chenault, J.J. Brooks, J.A. Sullivan, J.W. Crooke, Jr., and Sam Bennett who suggested that the U.S. government build a federal building in Richmond. All those who were approached agreed to sign, except two who were described by the editor of the Kentucky Register as persons "who couldn't see through a hogshead if both ends were knocked out."

Captain P.P. Ballard, census enumerator for Richmond, had counted the city population earlier in that year as 4,750. However, the government required the population to be at least 5,000 before it would erect a building. After some reconsideration of the location of the city limits by the city officials, Ballard re-canvassed and the total was found to be 5,250.

In January 1891, McCeary's bill to authorize the building was favorably reported out of the Committee on Public Buildings and Grounds and was then passed by both houses of Congress. The funds allotted totaled $75,000. This was not sufficient for a stone building which the Richmond men wanted, so the proposed plan by the government architect called for the three-story building to be built of brick.

Three lots on Main opposite the Presbyterian Church were purchased from William Willis, Joe Collins and Mrs. Mary Stockton for a total of $15,000. On one lot was the old residence of I.D. Smith which Willis operated as a hotel named "Willis House." The lot owned by Collins had on it an ancient three-story brick building which had been used in the early 1800's as a nail factory.

Three times the government architect's plans were changed to suit Congressman McCreary who carefully followed the developments at every step, even making six trips between Richmond and Washington at his own expense.

In 1894, after the foundation had been built, Congress passed a bill sponsored by McCreary to allot $25,000 more in order to make the building out of stone. McCreary changed the type of stone from Indiana limestone to stone found to "Rockcastle County Freestone" to support business in his district. He also changed the design of the front steps and the location of the clock from mid-tower to the top. G. Mondy & Co. of Louisville were chosen to be the general contractors and Alfred Douglas and Sam Rice were appointed the government supervisors of the project.

In 1897, after six years of construction interrupted by delays, the building was completed. The editor of the Kentucky Register in August 1897 stated that as one passes through the impressive oak doors he enters a large spacious lobby with handsome gas chandeliers, oak paneling, and marble floor.

The entire first floor was to be occupied by the post office. As one climbed to the top of the large stairs he encountered the second floor offices of the Collector of Internal Revenue, all furnished with oak furniture. The third floor was designed as a courtroom, but a bill to establish a U.S. District Court in Richmond was defeated in Congress. It was not until several years later that the Federal Court was held in that room. As one climbed up into the open part of the tower just below the slate roof he could see, according to the editor, all of Madison County and part of Fayette, Clark, Rockcastle, Garrard and Jessamine.

The building has been empty since 1962 when the new post office building was built on Water Street. 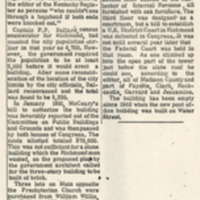