In the mid-1960's the Madison County Courthouse was remodeled. At this time the world famous Squire Boone rock was moved from its position outside the courthouse into the main foyer where it was put under glass for protection.

The inscription on the rock reads 1770. Who first discovered the rock after Boone's party had left the area os unknown, but Gen. Green Clay (1757-1828) initialed the rock while running a survey of Madison County somewhere around 1790-1800. The rock was well known to the inhabitants of the southern part of the county. It stood on the Ballard farm and was presented to the County Court in behalf of the heirs of James B. Ballard. The rock was moved from its long time place on the Ballard farm in 1891 to a position in the front of the courthouse, immediately in front of the County Court Clerk's office (pre-remodeling days--toward First Street). It was surrounded by a metal fence. Later it was moved to the First Street side of the courthouse and a small shed was built over it to protect it somewhat from the weather. As stated above, it may now be seen inside the courthouse.

Where exactly did the rock stand originally and how did Squire Boone come to carve his name on it? The rock was originally located in southern Madison County between Buzzard Basin Knob and Morton's Knob.

It was near Joe's Lick Knob. It stood on its end between the first two named knobs the edges precisely North and South, the faces East and West.

Another large stone similar in shape lay flat only a few feet away. It was turned over by Dr. Wilbur C. Burrough's expedition from Berea College, but it bears no inscription. The rock was removed in 1891 by Sheriff J.W. Bales and a special committee. It was set four feet in the ground. The rock itself is eleven feet long, four feet to two feet wide, and 16-20 inches thick. It weighs about 7,500 pounds.

In the event that you do not know where Joe's Lick Knob, or any other of the knobs are located may I suggest that you do what I did several years ago. Drive out US #421 towards McKee. Beyond Kingston, but not quite to Pilot's Knob you should turn right on Blue Lick Road. Just a short drive and you will easily locate the two knobs on your left. Your imagination will have to place the rock between them and Squire Boone alongside the stone.

But why did Squire cut his name and a date on the rock? It seems that in 1769 Daniel and Squire Boone and a party of other hunters came into Kentucky on an expedition. In the spring of 1770 Squire went back to North Carolina to replenish the stores of ammunition and supplies. The others of the party had either been captured or killed by Indians, except for one who was devoured by wolves, so Daniel was left as the only white man in the area. Daniel traveled as far afield as the Falls of the Ohio (present day Louisville) while waiting for his brother's return. In the later part of July, Squire returned to Kentucky and carved his name on the rock near their previous camp in the knobs so Daniel would know that Squire had come from North Carolina. In the summer of 1771, the adventurous brothers broke camp and went back to their home in North Carolina.

So the next time you enter the courthouse, pause for a moment before the huge rock and reflect on those days 200 years ago when Squire Boone used it to communicate with his brother. Two white men, alone in the wilderness, brought together by a message carved on a rock. 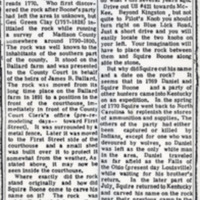