A small but valuable collection of Indian arrow points and spearheads was recently donated to the Eastern Kentucky University Museum by Mr. Thomas B. Cotton a farmer and barber of the Cottonburg community.

The special value of these Indian relics lies in their all being found in the Cottonburg-Poosy Ridge area between Silver Creek, Paint Lick Creek, and the Kentucky River, said by many persons to be the last part of Madison County to be inhabited by the Indians. Mr. Cotton's farm is only a few miles from the large prehistoric burial mound at Round Hill in the Northwestern section of our county.

Some of the arrow points appear to be of several kinds of flint, ranging in color from light gray to a very rich bronze. Several are of a similarly hard but deep black stone. Most of these arrow points have a "Christmas tree" shape, but several have a basic triangular shape with slots for the binding string chipped into the stone. While all show considerable skill in the chipping technique, the different basic shapes and styles suggest different groups of Indians or perhaps different periods of time during which this area of Madison County was occupied by these early Americans.

One spearhead has fine regular teeth along the penetrating edges. After perhaps 200 or more years, these teeth are still so sharp that they can cut a slot into a piece of hard cardboard as neatly as any modern coping saw could do.

Mr. Cotton says that these ancient Indian weapons were all plowed up by him as he tilled his farm during the last 20 or 30 years. Most of them were found in a field where many years ago there stood a grove of trees called "Jobe's Sugar Camp." Early Madison County pioneers ventured to this place near Indian territory to get maple sap for the making of maple sugar. Possibly some of these weapons were used against the settlers, while others were used in hunting wild animals and birds which also frequented the grove. We can only imagine that excitement of the hunt and the dangerous adventures of the settlers which these primitive weapons were involved in.

The Eastern museum, located on the top floor of the John Grant Crabbe Library is open to the public 1 p.m. to 3 p.m. daily, Monday through Friday. [The museum closed it's doors in 1978.] 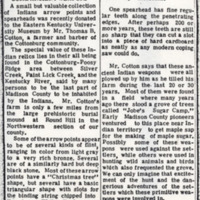