Over the years three villages have served as the centers of population for Madison County. Two have passed from the scene, one remains as a modern day city.

Boonesborough began with the arrival of the Daniel Boone party at a point near Otter Creek on the Kentucky River. It was the site of the first government meeting in Kentucky. It was incorporated in October 1779, with twenty acres laid off into streets and lots. The first ferry rights in Kentucky were given to Richard Calloway in 1779. In 1789 Boonesborough had 120 houses, but by 1810 the population was down to sixty eight. The post office was closed in 1866 and today there is no longer a village of Boonesborough.

On August 22, 1786, Madison County, Kentucky was organized and Milford, a settlement overlooking Taylors Fork branch (a few miles out the Lancaster Pike), was selected as the county seat. In 1788 a permanent courthouse of wood and stone was built. However, in 1798 state authorities authorized the county court to transact its business elsewhere. And although 300 angry men under the leadership of Tom Kennedy tried to stop them the records were moved. The citizens of Milford were compensated to the tune of $1,600 for the removal of the county government. All that is left of Milford is a tumbled down stone chimney of the old courthouse.

The court had purchased two acres of land near John Miller's barn and brick kiln. Dreaming Creek meandered through the field and the town which was laid out by John Crooke was called Richmond, after the capitol of Virginia. The first courthouse was built by Tyra Rhodes on the site of Mt. Nebo Church. In 1810 the court appropriated some ground near the courthouse square for a marketplace, for which purpose it functioned until the 1950's. The present beautiful courthouse was erected in 1849 at a cost of $40,000. In the 1850's an iron fence was erected about the courthouse. Civil War prisoners were kept within its bounds. It was later sold, but in 1908 it was placed along the Main Street portion of the Richmond cemetery, where it still stands.

Three villages, then, have served as the center of Madison County. Richmond, rapidly changing, we still see. Boonesborough and Milford are only a memory. 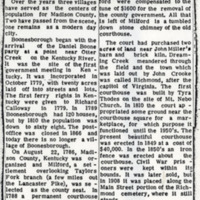