After it was first established in July 1802, the U.S. Post Office in Richmond moved around frequently before it finally got a permanent home. According to the Kentucky Register, of August 6, 1897, the Richmond Post Office had been located in leased store buildings at the corner of First and Main Street; on the north side of Main between Second and Third; on the south side of Main between First and Second; on First between Main and Irvine; on Second between Main and Irvine; on the corner of First and Irvine; and finally on Irvine Street near First for about 10 years prior to its move into the large stone federal building on Main in 1897. After sixty-five years at that location, it moved in 1962 into its new present building at the corner of Water Street and Madison Avenue.

In December 1961 Mr. Hisel retired and Harry Moberly was appointed to fill the position. Mr. Moberly started with the postal service as a substitute city carrier in 1937, and has been with this post office since that time with the exception of four years' service with the U.S. Navy. 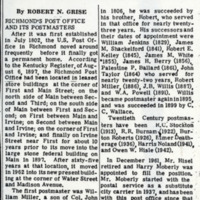