If you drive along Tates Creek Pike, you will see on the right hand side of the road a raised level which continues for several miles. If you continue on to Valley View you can see large iron post standing across the Kentucky River. This is all that is left of the Three Forks Railroad. This train operated from 1883 until the 1930's when the tracks were removed. It tied together the towns of Nicholasville, Richmond, Irvine and Beattyville. Its points of entry in Madison County were at Valley View and Panola. Another train operated from Paris through Winchester into Richmond under the name Central Kentucky Railroad. It was built mainly by convict labor.

A third track was laid in Madison County from Stanford to Richmond by the Louisville and Nashville Railroad in the 1870's. It continued to do business until the 1930's depression when it too ceased to operate. It entered Madison County at Paint Lick, the scene of a famous train wreck in 1882. The engine was pulling a circus train and its brakes were unequal to the task; the train broke loose and wrecked, killing both man and beast.

Some of the train stops are still familiar to present day Madison countians: Red House, Ft. Estill, Million, Moberly, Brassfield, Silver Creek. Today only one track remains - that of the L & N from Winchester through Richmond to Berea and points south, over the old Central Kentucky Railroad right of way. The double track, laid with pride in the 1920's was reduced to one in the early sixties. And on March 7, 1968, many Madison countians went down to the almost closed down Richmond depot to see and ride the last passenger train to call at our county seat.

The writer remembers the days of steam in Richmond quite well. It was an event in our young lives to go to the depot and see the train come in. The engine would snort and blow steam. The engineer or fireman would oil around the wheels. Others would fill the engine with water from the large tower that stood across the track from the station. Mail and freight would be loaded. Passengers, including many students for the Teachers College, would arrive and depart. All the passenger trains had a number, and 32 was the famous one at our house, being the one most frequented by our relatives from Corbin.

Automobiles, trucks, buses, and airplanes have driven the railroads to the wall in many areas. They may never return to their place of glory. Even so, they are a bright spot in our memories and they hold a place in Madison County's history. Even today there is nothing quite like the sound of the freight signal wailing through the night, calling us back to the track, the depot, and faraway places. 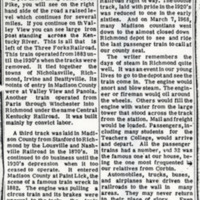