Some of the newer residents of this city may have wondered about a large three-story brick building at 114-118 North Second Street dominating that block opposite the Courthouse. It may even surprise some of the older natives to read that this building was once a large hotel, in fact, the only hotel in Richmond at one time, with several hundred guests per month.

According to the Madison County Court clerk's records, this 60' x 82 1/2' hotel building was built in 1871 by Mr. I.D. Smith. He had purchased two adjoining lots from Sarah E. Elder (in December 1845) and from Dudley Webster (in February 1851). The hotel was named "Idee House" after Smith's initials, and was advertised as having "50-odd rooms," and being fully illuminated with gas. Board and room were offered for $6 per week. In 1875, Messrs. Ballard and Willkerson became the proprietors. They refurnished the hotel and advertised that it included "the handsomest billiard room in town."

In December 1875, the heirs of I. D. Smith had C. H. Breck, the master commissioner of the Madison County Court of Common Pleas, conduct a sale of the property. The high bidder was Mr. J. R. Garnett who bought this large building for $10,000. In 1876, Garnett was joined by a Mr. Shirley as manager under the new name, "Garnett House." For several years after 1878, newspaper ads listed Mr. Shirley as proprietor.

In January 1903, the hotel was leased by R. G. Engle and was opened for a few months under the name, "New Garnett House." In December 1903, Charles Jacobs, a Richmond tailor, leased the building and ran it for a couple of years as the "St. Charles Hotel." The enterprise probably reached its greatest in 1905 under the name "The New St. Charles Hotel," with Charles Clay as proprietor and Tom Tribble as manager. The Climax, a weekly Richmond newspaper, reported that in March 1905 over 800 guests had registered (all in a 50-room hotel!). The business met an untimely end when the insides of the building were severely damaged by fire in 1908. It staggers the imagination to guess how many wedding parties, new year celebrations, Confederate reunions, business deals, deaths, and other human experiences occurred there during those 37 years from 1871 to 1908!

The next year, the firm of Douglas and Simmons Hardware Co., which had been located at 233 W. Main Street since it was organized in 1899, bought the building and rebuilt it in order to have larger quarters for its business. The elevated first floor was lowered to its present street level. Also, at that time the stone sign "19 Douglas & Simmons 09" which is still atop the building was erected.

Everything in hardware from blacksmith supplies to slate roof could be found at this store. Some of the brand names that might be recognized by older readers were White Mountain refrigerators, Majestic rangers, Buckeye cultivators, and Vulcan Chilled plows. In 1910, Mr. J. W. Deatherage was taken in as a partner.

In addition to the hardware store, part of the first floor was occupied by the Richmond Electric Light Co. (taken over later by Kentucky Utilities) and Miss K. V. Schmidt's Millinery Parlors. With the exception of several offices on the second floor, all of the upper portions of the building were used by the hardware firm.

During the depression of the 1930's the firm was forced to go into receivership. Following the depression in 1939 Mr. C. B. Lovell and Mr. P. H. Best of Danville bought the inventory and started the present firm, Best-Lovell Hardware Co., which has been there for the last 30 years. Other businesses presently in this building are the Smart Shop for Tots and Teens and Eldean's Beauty Box.

(The building is now owned by Mrs. Nancy I. Myers.) 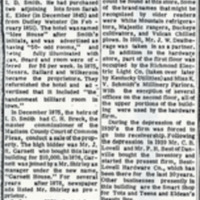