Many early Richmond landmarks were tracked down and placed by Dr. J.T. Dorris, former Eastern history professor, now retired. Although they are long gone from the scene it is interesting to look at the present location, then close one's eyes and try to visualize the old structures.

Main Street was laid out east and west by surveyor John Cooke. Streets were surveyed parallel to Main and were originally called North and South, later changed to Irvine and Water. First Street was of course prominent because of its proximity to the courthouse. The first house was built by John Miller on the corner of Main and present day B (North Madison). In 1812, a log tavern opened on Main and First, later replaced by a three-story brick hotel which burned in 1874. It was in the northeast corner, present location of the Southern Dollar Store.

A powder magazine was built in 1857 on the bluff of the old city graveyard opposite the present Smith Ballard Street on the north side of Main. The cemetery had been moved across the street to its present location the year before. The magazine was torn down in 1879. A dam for a mill was used to cross Dreaming Creek on Main Street until 1818 when a bridge was built. This location can be pinpointed by looking at Dreaming Creek as it passes between the Kroger parking lot and the Water and Gas Works.

In 1837, Main Street was paved, joining First and Second which had been macadamized two years before. In 1890 the town limits were extended to a circle one half mile in radius from the courthouse. Richmond had its first phones in 1878 running second only to Louisville. Gas came in 1874, electricity in 1884. In 1881 Richmond had 12 public wells and cisterns. To my knowledge the last public well and pump was on the corner of Water Street and Madison Avenue. It was used up until the 1940's when the water was condemned. The pump remained until the new post office was built over it in the 1960's. In 1888, a water works was formed. The Federal Building (old post office) was erected in 1891. The horse trough now filled in and sitting in the courthouse lawn was in use in the street at that same corner up until World War II. Zaring's Mill existed at the site of the old mill on Dreaming Creek until torn down to make way for Kroger's. The old Dixie Hotel stood for many years at the present location of One Hour Cleaners next to the old post office. 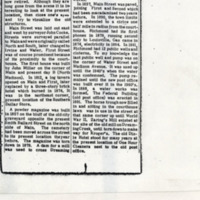