"Horse Men's Headquarters" in large letters across the top of a two-story red brick building at 123 East Main Street in Richmond back in the early 1900's served notice on persons passing by that they were in front of one of the biggest livery stables in Kentucky.

In December 1908, back when automobiles were still a curiosity, J. R. Azbill purchased a livery business in a small building at this place where Furniture City is now located. Less than a year later, the building and stock were destroyed by fire. Rather than giving up, Azbill began at once to rebuild. The new building was two stories high and 35 feet wide on Main Street. The front door was wide and high enough for a four-horse carriage to pass through easily. There were separate ladies' and men's waiting rooms and "modern" conveniences such as running water. There was even a telephone so persons could ring up number 99 and have a rig delivered to their homes or places of business.

The building had an amazing depth of 280 feet, most of the distance back to Irvine Street. Azbill claimed that he could house 500 horses at one time, if necessary. It was certainly the largest livery stable in Madison County, and one of the largest in the entire state in the early 1900's.

Azbill rented not only horses, but also "stylish rigs for all occasions" according to his advertisements in the local newspapers. He could provide appropriate "closed carriages for funerals, weddings, and social events." Horses were for sale as well as hire, and several kinds of horse feeds could be purchased and delivered.

In addition to these regular features of the livery business, Azbill also operated from this building a baggage and freight wagon business, and an omnibus which met every train (over a dozen a day) and carried passengers to all parts of the city.

Azbill's Livery Stable and others like it in Richmond, both large and small, were slowly driven out of business by the ever increasing number of auto-mobiles in the 1920's and 30's. 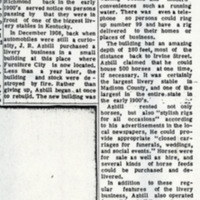