Baldwin, Million, Red House, White Hall. These placenames of villages In Madison County are easily explained by their connections to family names or homes. Others are not so easily identified.

Kingston, founded in the early 1800s, was named for Theodore King, the first storekeeper in that community. The oldest building in Kingston is the white frame two-story one which has housed the colored school and the Masonic Lodge.

Waco was, of course, named for the Texas town. It was the scene of a raid on Union Sympathizers by some of John Hunt Morgan's Confederate cavalry. Just beyond Waco, toward the river, is a community originally called Texas because of the statement by Abner Oldham to the effect that, he wouldn't have all that "blankety-blank" Texas country as a gift. In the post-- Civil War period it was discovered that there were two Texas, Kentuckys so the post office department declared the one in Washington County as the official one and assigned the name College Hill to the Madison County one. The reason for this was the presence in the community of a school founded by Dr. Jeremiah Ayers which was called College Hill Seminary.

Kirksville was first called Centerville, but was changed in 1845 to honor one of its early (l832) storekeepers, Samuel Kirkendall. Valley View was named for its beauty by J.H. Powell and S.F. Rock in 1891 and became a flourishing lumber town. Around the turn of the century it had a population of around 2,000.

Elliston was named for Thomas S. Ellis, who bought a mill on Muddy Creek in 1848. You may have to search for this community now that the New Irvine Pike by-passes it. It is located just this side of Waco toward Richmond. Brassfield was named by D.C. Martin for his grandmother Brass, while Doylesville was called after its first merchant Pat Doyle. Although it is not positive, Berea is thought to have been named for the biblical city.

And as for Punkin' Run Cow Bell Hollow and Jolly Ridge, I shall leave them to your fertile imagination. 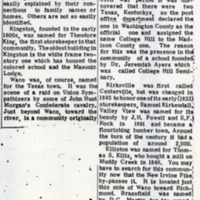