About fourteen miles northwest of Richmond on Ky. 169 is a quiet little village at the mouth of Tates Creek where it enters the Kentucky River. As a person drives through the village he goes down to the river where one of the last ferryboats in the state is waiting to take the automobile across. He can see the concrete piers of the old railroad bridge, reminders of a busier day. This village may have been named "Valley View" because, especially as the sun sets, there is a fine view of the "lovely valley surrounded majestic hills," as one old Richmond newspaper editor described.

The first house at this location was built near the river in the mid-1800's by Strother Million. It is said that many times rivermen on boats and barges stayed overnight at this house. Million, for whom that voting precinct was named, operated a general store in a building near the water's edge for many years until the building was swept away by a flood in 1889. A steam-driven saw mill was built in 1844 by A. A. Miller about one-half mile downstream from where the Million house and store stood. It was operated for 53 years until it was destroyed by fire in 1897. The village was laid out and named about 1890 by J. H. Powell and S. F. Rock of Richmond.

There were only a few houses and a store for several years until 1888, when the R. N. I. &amp; B. Railroad was run across the river and through the village on its way from Nicholasville to Richmond. That really started a boom - ten years later the town boasted a rock-surfaced road to Richmond, river transportation, passenger and freight railroad service in two directions, three general stores, three blacksmiths, two sawmills, one hotel, one church (Presbyterian), one doctor, and one public school. There were also a railroad depot, telegraph office, post office, and a weekly newspaper, the Valley View "Argent." Population by this time numbered around 500.

By far, the largest business was the Southern Lumber Company which operated a steam-powered band saw mill three stories high which was built in 1891. There were four boom docks for holding logs that were floated down the river to the mill, which had a capacity of 30 million board feet a year, The company had its own electric light plant and also its own telephone system which connected the mill, the office, the four boom docks, a store, the freight depot, and the residence of the manager, G. A. Roy.

In "Glimpses of Historic Madison County Kentucky," Dr. J. T. Dorris says that the Mobry- Robinson Lumber Company also existed in the early 1900's, and that the population of this village for a while exceeded 1,000.

During the 1920's the logging business decreased and the depression of the 1930's brought an end to both the lumber business and the railroad, and with them the hope of sizable growth and prosperity for this little community. 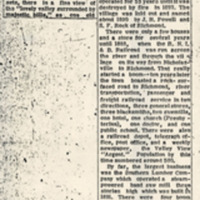