Way back in 1798, when John Miller's land became the site of the town of Richmond, he donated approximately one acre of land on the north side of Main Street (opposite what is now Smith-Ballard Street) for a burial ground as long as it was used for that purpose. There were many graves there dating from the early 1800's, but the exact number was not known, because most of the graves were marked only with large rough unlettered stones. Only about a dozen stones had inscriptions carved upon them.

Many of the bodies were buried hurriedly in 1849, when a cholera epidemic hit Richmond. It was reported that in some cases two or even three bodies were placed in the same grave.

Those stones which did have lettering included one of the granite with the inscription, "Allice Wherritt, died 1849, age 3." Another read, "Here resteth the boddy of Mary, the Consort of Roger Greenhalgh. A native of old England, Who died March 8, 1851 in the 53 year of her age. Happy in the Lord." A 2 1/2, by 6 foot slab covered the grave of "Mr. Andrew Elder, Born October 2, 1798, Died September 2, 1844." The badly weathered inscription included a quote from the Scriptures and ended. "But trust thy spirit is resting now whare trubles never come." The earliest date is found on the stone inscribed, "In memory of Mary Logan, who was born in the tenth day of October in the year of our Lord one thousand seven hundred and seventy one, and departed ... one thousand seven hundred and ninety eight."

The old burial was not used much after the Richmond Cemetery was established in 1856. It became overgrown and unkempt, causing the location and identity of many of the graves to be lost forever. In complaining about the conditions, one newspaper editor of the 1870's remarked in print that as he passed by one day, some small boys were playing with a skull which had been found in the crumbling bank at the edge of the street.

Finally, in 1890, some 92 years after it was established, the heirs of Malcom Miller, grandson of John Miller, decided to remove to the Richmond Cemetery as many of the remains as could be found, in order to reclaim the land for the Miller family.

Today, thirteen of the weathered old stones with inscriptions can be seen in the far eastern section of the Richmond Cemetery, next to the railroad property, the site of the burial of Union troops after the Battle of Richmond. 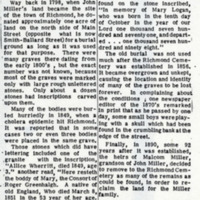