Presbyterians and the Disciples

Presbyterians and the Disciples

The First Presbyterian Church in Madison County was organized by Rev. James Crawford in 1790 at Round Top and was called the Silver Creek Church. In 1797 it merged with the Paint Lick Church. The first Presbyterian church in Richmond dates from 1827 when the Lord's Supper was administered at the courthouse by Rev. James C. Barnes. The first building was erected in 1828 on the present site. A new church was built in 1859 and the present house of worship was erected in 1921.

The First Presbyterians were southern oriented and were strong supporters of Confederate leaning Central University. Some Presbyterians were Union-leaning and after the war a Second Presbyterian Church was organized and a building built in 1884 on East Main and B Streets. The building was sold in the 1940's and the church was reorganized on Estill Avenue where it still holds services. The Presbyterians operated at Kirksville from 1878 until 1921 when they merged with the Richmond church. White's Memorial is the only rural Presbyterian church.

The Disciples of Christ first operated a church at old Cane Ridge Meeting House in Bourbon County and early in its growth opened churches in Madison County at Flatwoods, Mt. Zion, Pond, Mt. Nebo (now Mt. Pleasant) and Union City. The Richmond church was organized in 1844 and originally worshiped at the location of the Richmond Motor Co., and the old post office building. Soon moving across the street a wooden office was constructed which burned in 1855. A third building was constructed in 1913, but it, too, burned in the 1960's when it was replaced by the present magnificent building. While hesitating to begin mentioning pastor's names I think it only fitting that the long service of Dr. Frank N. Tinder remembered.

In 1895 a mission was begun in the East End of Richmond and this became the Second Christian Church, since 1936 called the Big Hill Avenue Christian.

The Berea First Christian Church dates from 1895 when the Union Church of that city refused to adopt a rule requiring total immersion and the Immersionists withdrew. 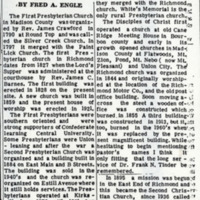