Streetcars in Richmond? Yes, that's correct. During the early 1890's when it was a good bit of trouble to hitch up a horse to run an errand or deliver a message and there were few telephones, there actually were streetcars running along Main Street of Richmond.

In the spring of 1890, stock issued by the Richmond Street Railway Co. was purchased by several local persons. In September of that year William Devore, the local omnibus and transfer wagon man, leased the line. He was to pay 7 per cent on the stock for the first year and 8 per cent thereafter. The track was laid for a distance of about one and one-half miles along Main Street from the west side of the business district to a point out East Main near the Fairgrounds. Plans were made to extend the line along Main, and also to run a line out North Second Street, but these hopes were never realized, as far as our old records indicate.

In September 1890, the street-cars themselves were shipped from a Northern manufacturer by rail, but they were delayed at the tunnels between Ford and Red they had been loaded too high. They were partially dismantled and brought on to Richmond the next day.

The cars were open on the sides, which made travel cold in the winter and dusty in the summer. The motive power was provided by small mules which Devore kept in his stable on Irvine Street. The fare was 5 cents.

Street railways in small towns were not, as a rule, very profitable and this one in Richmond was no exception. By the mid 1890's the cars ran only three days a week, and by 1898 business was discontinued. The tracks were declared a nuisance by the City Council in May 1898, and ordered torn up. The Climax editor declared:

"With a reckless abandon born of sheer delight our citizens rip and run their vehicles across Main Street where lately they dared not go out of a snail's gallop for fear of wrenching off a wheel on the streetcar tracks. But the tracks are no more, and the people are glad. Billy Devore is glad, and the little mules are glad." 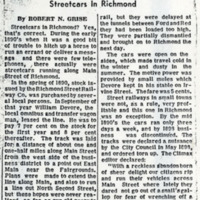