The first house in Madison County was undoubtedly built as a part of the Boonesborough settlement. John Lyle built the first individual home outside of the Fort area. Andrew Bogie built a stone residence near Silver Creek in 1796. There seems to be no agreement among county historians as to what is the oldest still standing house in the county. Dr. Russell I. Todd lists Sleepy Hollow on the Boonesborough Pike as among the oldest (1800). It would be interesting to hear from this newspaper's readers on this question of the oldest standing house in Madison County.

Madison County's first sheriff was Joseph Kennedy of near Indian Town House on Paint Lick Creek. He was appointed by Patrick Henry, governor of Virginia, on Aug. 22, 1786.

The first election in Richmond was held in 1800. It arose when one group of citizens wanted only one fire cistern dug and another group wanted more than one. Also at issue was the question of making Main Street passable and improving the streets on four sides of the courthouse. John Miller, the town's founder, headed the anti-spenders while Thomas C. Howard, who had the largest store, headed the expansionists. The election was sort of a standoff, although Howard's side seems to have gotten the most votes. Two cisterns were dug, one at First and Main, another at Second and Main. A passable road was made around three sides of the courthouse square but the north side (Irvine Street) was left as a dirt cow patch. Several years later the Second Street cistern was filled in and another dug on Main at Lancaster Avenue to give fire protection to the cluster of churches at that point.

Richmond's first public marketplace was opened officially in 1810 on the First Street side of the courthouse square. There it remained until the late 1940's when the local officials ran the street merchants off and made them move to Water Street. The First Street market was quite colorful. Besides the sellers of vegetables, all other types of hucksters and entertainers set up shop. It was an exciting place for the young and old alike. Forced to move after nearly 140 years, it seemed to lose its zip.

One of the first springs in Richmond was at what is now the corner of Collins and Water. It was used by John Miller, first settler of the area, whose home was on the Collins Street hillside. Court first met in Richmond in his barn. 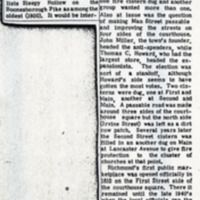