In November, 1898, after the local gasworks blew up and was partly destroyed, the City Council of Richmond considered the lighting of the streets by electricity because many of the citizens had been complaining about the weak and uncertain gas streetlamps which had been used for many years.

A new out-of-town company with D. J. Hauss of Cincinnati as president and Frank H. Adair as the superintendent received Council approval and began almost at once to sell $1,000 worth of stock. In January, 1899, a lot on Laurel Street near the Ross and Taylor Tobacco Warehouse, one block from the R. I. N. B. Railroad depot, was purchased from Judge John C. Chenault. A large brick powerhouse was built and by April of that year a steam engine and a generator (with less than 100 kilowatt output) was installed. As the electric lines were being erected around town, a local newspaper editor wrote that electricity "will put Richmond on equality with Valley View and Ford, both of which have had this luxury for a long while."

During that spring of 1899, arc lamps were suspended in the middle of the intersections at Main and First, Main and Second, the L. & N. depot, and over the bandstand at the northwest corner of the courthouse lawn. Many other incandescent streetlamps were erected along the various streets in the city. A large number of residences and business houses were signed up to be wired.

Adair had originally announced that the power would be turned on during the first week of May, 1899, but there were many delays. The resistance of people to the placing of poles along the streets reached a peak when two poles erected in front of the Walker residence at the corner of Main and Lancaster Avenue (where the First United Methodist Church is now) were pulled up in the middle of the night. The custodian of the Federal Building, a Mr. Willis, threatened arrest of anyone who dared to put a pole in front of that building. The company needed that warning, and even today the utility poles on that block are placed at the side property lines of the old federal building grounds.

The company was also plagued by financial troubles. After the original capital funds were exhausted, the company sold more stock, raising the total to $15,000. Still the lights did not come on, and the editor of the Climax wrote in disgust, "Richmond will get electricity when she is struck by lightning."

Finally, in August, 1899, the generator was running and the electric lights were one of the attractions for the annual street fair that year. Individual subscribers got excited about the electric fan, and merchants discovered the value of a lighted show window. Their joy was short-lived, however, when the power went off a few weeks later because the company was forced into receivership, and Hauss and Adair were ordered to stand trial for obtaining money under false pretenses. After several unsuccessful attempts to operate it again, Judge Scott, in May of 1900, ordered the plant sold. It was bought for $4,500 by Stanton B. Hume who promised the City Council that power would be provided by January, 1901.

In the early 1900's the company was incorporated with L. B. Herrington as president, J. Hale Dean as secretary-treasurer, and G. T. Bogard as superintendent. The office was located at 110 North Second Street. By 1910, two additional generators were installed, making a combined maximum output of 210 kilowatts. A total of forty-three arc lamps and 145 incandescent streetlights had been installed. Company ads boasted that the "new Mazda tungsten lamps made a light in which all colors can be distinguished."

The Richmond Electric Light Co. was purchased by Kentucky Utilities in 1912, ending the days of the little independent electric power supply system in Richmond. 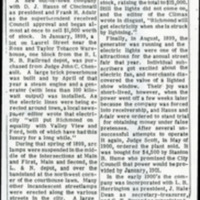