Although the early history of education in Madison County is rather sketchy and uncertain because there were no regular records kept, we do have some accurate information about the first schoolhouse in Richmond and its teacher.

The first teacher was Israel Donaldson, who arrived in Richmond on June 1, 1799. Part of his journey was on an emigrant boat on the Ohio River which was operated by a Major Parker of Lexington. Donaldson taught this first school during the summer and fall of 1799. His pay (sometimes in goods or produce rather than cash) consisted of the tuition or "subscriptions" paid to him by his pupils. Although the exact number of pupils probably varied from one month to another, we can be sure it was a rather small group of would-be scholars who were assembled for that pioneer educational effort in this city.

Donaldson "kept school" in a small rough log cabin, only sixteen feet square, built on the southeast corner of Main and First Street now occupied by the McKee building. The walls were built of round logs covered by clapboard. One-half of the floor was made of planks hewn from logs, while the rest of the floor was simply packed dirt. There were no desks for writing, only a shelf along one wall which was supported by long wooden pins driven into auger holes bored into one of the logs. Benches were made from split logs with stakes driven into holes for the legs. At the front of the building was a small table for the schoolmaster. We do not know what books were used, but we can surmise that there were very few materials and that only the rudiments of reading, writing, arithmetic and subject matter were taught.

The number of years this school was operated is not known. During the early 1800's several small private or "subscription" schools in Richmond were conducted by scholars in rented rooms or by educated young ladies in their homes. 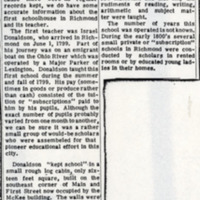