An Old House in Baldwin

An Old House in Baldwin

The two writers of this column drove out to the Baldwin community the other day. It is a beautiful part of Madison County, with rolling hills and prosperous farms. You can see from Berea to Lexington from some of its high points. While there we visited in the gracious home of Mr. and Mrs. Jerry H. Jones. The Jones’ home is an old one, built somewhere in mid-19th century. Terry Perkins lived in it from 1854-1898, being followed by J.H. Jones (1898-1944) and the present Jones family who moved in in 1944. The house was originally two log rooms with a dog trot between them.

The house was then renovated all by the Joneses themselves with special attention to keeping the old original lines. Mrs. Jones has furnished it with old items and she knows the background of each piece. Items of special interest included a slipper rocker, a fainting couch which came from the old Miller School and was used by Miss Ida Smith (Jones) for students who fainted or took the vapors or whatnot, a bluegrass seed stripper, a footbath, and many old mantels and doors. The house is indeed one of Madison's fine old homes.

Outside are many other interesting historical features. In the yard is an old log cabin now used as a smokehouse. The gate in the front is of wrought iron and came from the famous courthouse fence in Richmond. There are three locust trees planted where original Mr. Perkins was thrown from his horse. Nearby is the Jones Cemetery with many old tombstones, where reportedly a deserter hid out during the Civil War.

Times have changed a lot since the days when, as Mrs. Jones told us, tobacco companies came and bought from the farmers’ barns rather than in town warehouses. Even so, Mr. Jones still farms his many acres with a team of mules in the time honored Kentucky manner.

We hated to leave this historical and prosperous section of Madison County. We should have liked to have driven on down the pike and visited with our old friend Emmitt Taylor. But city duties called us and we left Baldwin and wound down the hill to Tates Creek and on home to Richmond. 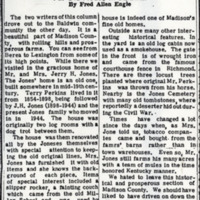