On the southeast corner of the Madison County courthouse lawn stands an interesting fountain of Missouri pink granite.

On the front of the base, which weighs 25,000 pounds, is a bathtub-sized horse watering trough above which is mounted a bronze fish with its mount serving as the water spout. At the top of the shaft, about 10 feet above the ground, is a bronze bust of "The Typical Pioneer" cast in bronze by George Julian Zolnay, the chief sculptor of the 1904 St. Louis World's Fair. On the front of the shaft right where a person could read as he watered his horse, was placed the inscription, "In memory of the pioneers who with energy born of conviction wrestled wealth from the earth and gave an empire to untold generations to come, this memorial is dedicated by one of Kentucky's sons. 1775-1906."

This pioneer memorial fountain (and horse trough) was given to the county in 1906 by an il1lustrious native of Madison, David R. Francis. Born in 1850 in a house on the McKee corner of Main and First Street, he left Richmond as a boy with his family and became wealthy as a grain merchant and famous as a statesman in St Louis. Francis was mayor of St Louis from 1885 to 1889, governor of Missouri from 1889 to 1893, U.S. Secretary of the Interior from 1896 to 1897, president of the Louisiana Purchase Exposition in 1904, and ambassador to Russia from 1916 to 1921. (It is an unusual coincidence that a Madison County man, Cassius M. Clay, was ambassador to Russia during the American Civil War, and another Madison County man, David R. Francis was ambassador to Russia during that country's civil war in 1917).

Francis said he wanted only to show his pride in the Kentucky pioneers, and to express his high regard to his birthplace. However, a big "homecoming" was planned when Francis arrived for the day of dedication of the monument in June 1906. After a parade from the Glyndon Hotel to the University Building on "the normal school grounds," there was a whole morning of speeches to an audience of several thousand persons gathered on the lawn. With J.A. Sullivan as master of ceremonies, a number of Kentuckians who had become famous in Missouri spoke in praise of Kentucky and of Francis.

A bronze plaque describing Francis and his accomplishments was mounted on the monument in 1950 by the Madison County Fiscal Court. At that time it was moved from the edge of the street to the corner of the courthouse lawn and the water was disconnected because the horses were by that time all gone from Main Street. The horse trough is filled with blacktop and now serves as a seat for some of the "courthouse sitters" who don't mind getting a little tar on their britches. 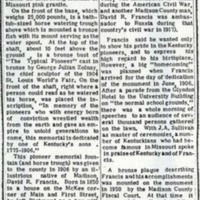