The Baptists and the Methodists

The Baptists and the Methodists

The Baptists were the first religious group in Madison County. Although Daniel Boone remained a Quaker many of his family were Baptists. Squire Boone was a Baptist preacher. The first organized Baptist church was the Tates Creek or Republican Baptists (1783-5). They were Regular Baptists. The Separate Baptists began at the Otter Creek Church in 1786. Viney Fork Baptist Church at Speedwell was founded in 1797. The Old Cane Spring Baptist Church was organized near College Hill in 1803, the Union City Baptist in 1812.

Two Baptist churches were organized in 1828 in the city of Richmond. The Primitive Baptist began on a lot given by Gen. Green Clay on the corner of Main and Lancaster Avenue and the Particular Baptist on North Second Street. The second group changed its name to Predestinarian in 1843. The present building says Regular Baptist on its corner stone but operates under the name Primitive Baptist. The Missionary Baptist organized in 1867 drawing its members from country congregations. They met in Green's Opera House until the late 1800's when they began meeting in the Main Street church building on a part time basis. In 1908 the Missionary group bought out the non-missionary. In 1923 the present building was constructed. Out of this First Missionary Baptist Church have come four others: Calvary, Broadway, Rosedale, and Linden. Other early Baptist churches in the county include Hay's Fork, Red House, White Oak, Round Top, Pond, Salem, and Silver Creek.

The Berea Baptist Church was organized in 1896 and the First Baptist Church of Irvine Street was founded in 1844 to serve the Negroes of that faith. The Baptists are numerous and include Pilot Knob, Bethel, Gilead, Mt. Pleasant, New Liberty, Mt. Nebo, Concord, Eiabeth, Richmond Predestinarian, Stoney Point, Otter Creek, Farristown, Goodloe Chapel, Middletown, Paint Lick, and Peytontown, among others.

The first Methodist church in Madison was Proctor's Chapel, near Boonesborough, (1790). This is now the Red House Methodist, although known at one time as the Providence. This merger took place in 1892. In 1796 Methodists listed Green's Chapel, Muddy Creek, Irvine, Concord. The Methodists in Richmond began in 1833 and erected their first building in 1841 at the corner of Second and Irvine streets.

In 1882 a new building was constructed on these grounds and the outline of the ball tower can still be seen in the converted church which now serves commercial purposes. The present building was erected at Main and Church streets in 1927.

The College Hill Methodist are one of the older Methodist groups in the county. Doylesvllle church was begun around 1880, Waco and Bybee are more recent. County Methodist churches also include about six others besides these mentioned.

A Methodist Church was organized in Berea in 1907 and a building erected in 1911. The African Methodist Episcopal Church was organized in Richmond with its first meeting being held in a box car. They moved to a log cabin on Water and Madison Avenue until 1874 when they moved to Hill Street. In 1903 the Negro Methodists built a church at Francis and E Streets where the present edifice was erected in 1927. 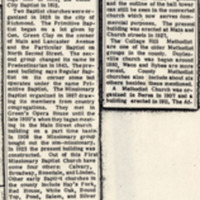