In the latter half of the 19th Century, Richmond was served by a stage coach line which covered the territory between Lexington and Irvine, a distance of 46 miles by loose rock and dirt roads. It must have been quite a sight three times a day (except Sunday) to see one of the huge ten-passenger stage coaches pulled by four horses rumble into town and draw up to a stop in front of the Garnett House hotel on North Second Street. In addition to passengers, the stage carried packages, special "rush items” and the U.S. mail.

In the 1880's the stage was greeted by A.H. Shirley, the Richmond agent for the company which was a partnership of Thomas H. Hume of Lexington who had been in the stage business since 1838 and William W. Pigg who joined with Hume in 1866. The drivers were Rolla Hazelwood who claimed in1880 that he had crossed the Kentucky River 8,400 times in his 14 years with the company; Lloyd Borders who had joined company in 1872, and Billy Devore, the driver of the Richmond-Irvine stage since 1868. Devore, in the 1890's was the operator of the ill-fated Richmond streetcar system.

The "rolling stock" of the stage company consisted of three large stage coaches and 24 horses. Employees included the three drivers and three agents. The annual cost of operation was around $9,000 a year.

The stage to Irvine left Richmond each day at 1 p.m., arriving at its destination at 6 p.m., some five hours later. It returned to Richmond the following day, coming into town at 11 a.m. The Lexington road was traveled by two stages, one leaving Richmond at 7 a.m. arriving in the other city at 11:30 a.m. (four and one half hours later), and returning to Richmond by 6 p.m. The afternoon stage left at 1:30 p.m. reached Lexington at 6 p.m., and returned by 11:30 the next morning. The fare from Richmond to either Lexington or Irvine was $1.50 one way.

In October, 1880, the editor of the Climax, describing the view atop the hill at Clay's Ferry, declared that "at this season the autumn foliage is as beautiful as any oil painting could be," and that this sight alone was worth the fare. 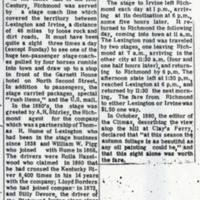