The Cassius and the Brutus Clays

The Cassius and the Brutus Clays

The story of Cassius Marcellus Clay I, the Lion of White Hall, has been told and retold. Little is said, however, of the fact that there were two other Cassius Clays and two Brutus Clays.

Cassius I was the son of Gen. Green Clay of White Hall, Madison County. One of his older brothers was Brutus Junius Clay (1808-1878). Born at White Hall, BJC I graduated from Centre College and settled in Bourbon County in 1827. He became a successful animal breeder. In 1840 he was elected state representative and in 1853 was president of the State Agricultural Association. In 1862 he was elected to Congress.

His home, Auvergne, is on the Paris-Winchester pike, in Bourbon. His son he named for his brother, calling him Cassius M. Clay II. CMC II (1846-1913) graduated from Yale in 1866, as had CMC I in 1832. He though was a Democrat and was elected as such to the state legislature in 1871 and 1873. He went to the state Senate in 1885 and in 1890 was the president of the Kentucky Constitutional convention. This may be one reason his son so successfully opposed any change in our Constitution which is still operating today. CMC II's speeches are printed and bound and are in the EKU library. He had served on the Board of Trustees of the University of Kentucky and President James K. Patterson wrote the introductory sketch.

Following his brother's example Cassius Clay I named his son, not for himself, but for his brother. Brutus Junius Clay II was born at White Hall in 1847. He graduated as an engineer from University of Michigan in 1868. Pattie A. Clay Infirmary is named for his first wife and he gave the Glyndon Avenue property in 1893. He married Mrs. Lalla Marsteller in 1895. In 1900 he was appointed U.S. commissioner to the Paris Exposition. Unlike his cousin, he was a Republican, and in 1905 he was appointed minister (ambassador) to Switzerland by Theodore Roosevelt. He followed Roosevelt into the Bull Moose Progressive fold in 1912. BJC II died in 1932.

Cassius M. Clay III, son of Cassius II, was born in Bourbon County in 1895 and followed the tradition to graduate at Yale in 1918, with LLB from the same in 1921. He was one of Kentucky's most outstanding orators during his service in the Kentucky state legislature. He died in the early 1960's. 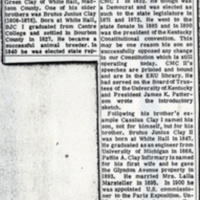