In the year 1798, a young man arrived in this community to become an almost forgotten pioneer in Madison's heritage: the first permanent merchant and storekeeper in Richmond. Thomas Howard was born in what is now Woodford County about the time of the Revolutionary War. When he left home to seek his fortune he became an employee of a Mr. Jordan an early storekeeper in Lexington. Upon hearing the news that the county seat of Madison had finally been settled by a fistfight and that John Crooke had laid off several streets about the new courthouse site, Jordan sent Howard to this brand new village to open a branch store.

Because of the increase in the number of settlers and his excellent business skill, Howard and the branch store prospered. Soon thereafter he went into the general merchandise business for himself, erecting a store building on Main Street. During his life in Richmond, Howard built a total of four buildings, all of which have long since been burned or torn down.

For a number of years Howard journeyed once a year to Philadelphia to buy goods, sometimes purchasing as much as $30,000 worth at one time. He had the goods hauled by road wagons across Pennsylvania to Pittsburgh where he sold the horses and wagons and transferred his load to "pushboats" coming down the Ohio River to Limestone (now Maysville). From there he once more hauled the goods overland to Richmond. As one can imagine, the arrival of new merchandise from the East was cause for considerable excitement among the pioneer folks in Richmond and Madison County.

Howard not only became prosperous as the first storekeeper in Richmond, but he also enjoyed great popularity and influence. Several times he was elected to serve in the state legislature. In his personal appearance he was described as being cleanshaven and always remarkably neat, with a large white neckcloth and shoes well blackened.

Not much else is known about our first merchant except that he died about 1840 and was buried in the yard of the home of Dr. Scott. Later his remains were removed to the Richmond Cemetery. Mrs. Howard, who lived some years after, left a life-sized oil painting of her husband in the keeping of Thomas J. Smith, another Richmond merchant, asking him to hold it until some relative of Howard could be found. Smith kept the portrait until 1880 when he shipped it to Alex B. Patrick of Frenchburg, a distant relative. 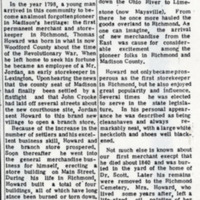