Richmond is built on Dreaming Creek. The headwaters and source of this creek are on the campus of Eastern Kentucky University, just off South Second Street.

A new parking lot covers some of the area now and the stream almost has its beginning in a pipe rather than a meadow as in years past. The stream used to flow behind the houses at the base of Summit, then go under Second and reappear between the lots on South Second and South Third.

It flowed back under Second and came to view again in a thicket on the corner of Second and Water. This portion is now covered by the Madison Drive In Bank and the Dairy Cheer. The stream can still be seen between Second and Third. It appears again in back of the old Madison Theatre lot and flows behind the Canfield Motor Company. After passing under Main Street it reappears between the Water & Gas Works and the Kroger parking lot. A mill operated at this point for many years. Eventually the stream enters Otter Creek, which flows into the Kentucky River near Boonesborough. The new Kroger lot will cover up more of this stream.

Many people do not know the name of Richmond's creek and those that do may not know how it was named. The story goes that Daniel Boone was making a dead fall trap for bears near this stream when nightfall carne. Being some miles from the fort, he crawled into a hollow sycamore tree and went to sleep. He dreamed that he was captured by Indians. And when he awoke at daybreak, sure enough there stood four red men. Daniel was a quick thinker, though, so he promised to go peacefully if the Indians would help him finish his trap. They agreed and he had them stand two on a side of the split hickory log and pull with both hands while he drove the wedge deeper. Instead he knocked the wedge out, catching eight hands in the trap.

This is legend and you may believe it or not, but anyhow Daniel named the stream Dreaming Creek after his dream and as such it is known even today. 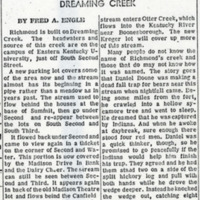