First Deed Ever Recorded in Madison

First Deed Ever Recorded in Madison

For several years after 1770, the date when Kentucky became a county of Virginia, there were many land claims by veterans who had been given public lands for participating in the French and Indian War and the Revolutionary War. In 1780, Kentucky was divided into Lincoln, Fayette, and Jefferson counties. The north-west portion of Lincoln became Madison County in 1785. It is interesting to realize that for seven years this county was actually Madison County, Virginia.

James French, who arrived at Boonesborough in 1789, became the deputy surveyor of James Thompson, the surveyor of Lincoln County. French worked mostly in the section of Lincoln from the Dix River to the Big Sandy River south of the Kentucky River, the part which was first designated as Madison County.

The first county seat of Madison was established in August, 1786, in a little log house at the village of Milford on Taylor's Fork of Silver Creek about four miles west of Richmond. (It was later moved to Richmond after a fistfight settled the matter.) In that little log courthouse at Milford the first deed recorded on February 29, 1787, by William Irvine, who had come from Virginia in the early 1780's, was county clerk until 1812.

The deed, which was called an indenture, stated that for "100 pounds current money of Virginia" one Charles Campbell of Lincoln County agreed to sell to Absalom Brown of Madison County "a certain tract or parcel of land containing 100 acres situated, lying, and being in Madison County and on the waters of Speed's Fork of Sugar Creek." This was land which had been claimed by Campbell and surveyed by French. The description included "all woods, waters and water courses thereunto belonging." The exact location of the land was described in reference to the bank of the creek, and to certain trees and other natural landmarks that have long since disappeared. Charles Campbell further agreed that "for himself and his heirs do and shall and will forever warrant and defend the title of the aforesaid..."

The witnesses of this first deed recorded in Madison County were William Bush who had been a cabin builder at Boonesborough, James Anderson and N. Huston. 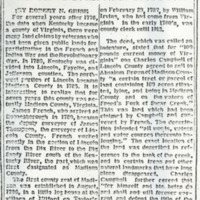