Richmond, a Center of Controversy

Richmond, a Center of Controversy

In the period after the Civil War, Louisville and Cincinnati vied in a strong rivalry to become the leading center of commercial trade for the South. Cincinnati was larger, but Louisville could claim to be a Southern city, being south of the Ohio River. A part of this rivalry involved the building of rail routes south into Kentucky. Thus in 1867 a conflict broke out between Louisville and Cincinnati interests about the location of a rail connection to Richmond.

The L & N wished to build a line from Stanford to Richmond as a part of the L & N system and backed by L & N bonds. Cincinnati proposed to build a line from Lexington through Richmond to a point near Mt. Vernon. Both sides carried on a propaganda war via the newspapers. The Louisville Board of Trade supported the L & N proposition and in March 1867 the Louisville city council authorized a subscription of $100,000 to the Richmond-Stanford line. L & N offered a lower cost, sounder program, whereas the Cincinnati interests were building a through line, not a branch.

On April 20, 1867 Madison County voted a subscription of $350,000 to support the Richmond-Stanford route. The Louisville Journal crowed at the good sense of the Madison Countians in refusing to allow themselves to be swayed by the "vulture-like Cincinnati and her aiders and abettors in Lexington." The L & N made good on its promises and surveys began within a month. Quite quickly, by Nov. 8, 1868, the Richmond branch was opened.

In 1872 a map of Kentucky railroads showed Richmond as the end of the L & N Lebanon line. No line connected Lexington or Winchester with Richmond. As was told earlier in this column the Cincinnati line was later built as well as one connecting Richmond with Nicholasville. The Cincinnati Southern line eventually became a part of the L & N system and is now the only rail line into Richmond.

As for the commercial rivalry of the two Ohio River cities, Louisville gained an early ad-vantage, but Cincinnati came on strong and it soon equaled the Falls City in trade with the South. And the rails through Richmond were a part of this rivalry. 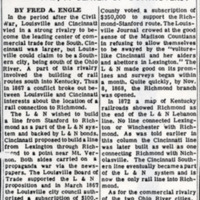