The Madison County courthouse square has been the scene of three houses of justice, one prison of war, and two hangings-one illegal, the other legal.

John Miller's barn served as the first courthouse but a log two story house was built in 1799. It had eight rooms and a brick vault underground for the safe keeping of records. The long time county clerk, Will Irvine, built his office on the corner of the lot at Main and Second streets. A jail was also built on the square. In 1847, dissatisfaction grew over the poorly constructed building and under the leadership of Col. William Rodes the present courthouse with its classic beauty was constructed, work being finished in 1849. It was paid for by a tax on farmers, and Rodes received the fantastic fee of $50 for his supervision.

In 1862, Confederate General Kirby Smith took the town of Richmond and for three months in the fall of that year used the courthouse, jail and the iron fence enclosed yard to hold around 1,000 Northern prisoners of war taken in the Battle of Richmond. The fence may now be seen in the front of the Richmond Cemetery. Smith got tired of foraging for food for the prisoners and paroled them all upon their promise not to bear arms against the South.

During the Civil War and its aftermath a lone highwayman flourished in Madison County. His name has been lost to memory, but his fate has not. In 1871, twenty white garbed members of the Ku Klux Klan captured the bandit and, in the presence of almost all of Richmond, hanged him from a limb of an old locust tree in the front of the courthouse at high noon. The body swung in the breeze for 24 hours with a note pinned to the coat warning other robbers of the KKK justice.

In 1894, Bill Taylor shot and killed David C. Doty from an ambush.*(Correction from Col. Kie Doty on Dec. 6) Taylor confessed, was indicted, tried by a jury, and sentenced to be hanged by the neck until dead. About 5,000 Madison Countians showed up on Jan. 11, 1895, to witness the county's last public hanging on a scaffold erected behind the courthouse.

The brick sidewalks and iron fence are gone. No longer do prisoners sleep in the courthouse. Hangings, legal or illegal, no longer take place in its yard. The building has been recently remodeled. Yet the classic beautiful design of 1849 remains unchanged and still attracts the eye of native and stranger alike. 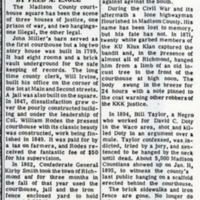