All in a Day's Work

All in a Day's Work

On a cold and snowy morning in January, 1879, with the temperature hovering near zero, Train No. 16 left the Richmond station (the Eastern end of the Rowland Branch of the L & N) headed for Lancaster and other points west.

Capt. Roberts, the regular conductor, was in charge of the mixed train which consisted of a locomotive, a tender, one passenger coach with nine passengers, two carloads of mules, and a caboose. The train made it well enough to Harris Station, about two miles out of town, but started running into drifts of snow which were difficult to push through.

Feeling that the locomotive might get stuck, the engineer uncoupled from the train and proceeded alone intending to break through the drifts and then return to pull the train through. He got as far as the home of J.C. Anderson when the steam turned blue, indicating that the boiler was too hot and the water almost gone. After snow was shoveled into the firebox to bring the temperature down, the engineer decided to go on to Silver Creek Station, ten miles from Richmond, to get more water. However, as it entered the tunnel just this side of the creek, the steam gave out and the engine sat helpless on the track.

After walking through the tunnel and over the bridge in the freezing wind, he reached the Silver Creek station where he telegraphed to "Richmond Junction" near Stanford for another engine to come to the rescue. After a considerable wait the second engine, complete with tender and caboose, arrived and pulled the disabled one to the water tank at the station to be refilled.

Meanwhile, Conductor Roberts became uneasy about the long delay and decided to leave his train and walk the track toward Silver Creek in search of his engine and crew. Several hours later, Roberts approached the vicinity of Silver Creek, having walked eight miles in zero temperature through snow which in some places was drifted as much as four feet deep. He watched helplessly as the engineer of the rescue engine worked up a running start through the tunnel to come after the stranded train.

The speed proved too great for the engine to hold on the first curve about 50 yards beyond the tunnel, and it jumped the track, taking the tender and caboose with it, and turning over and slipping into the ditch. Roberts helped the uninjured crewmen out of the wreck and they made their way back to the Silver Creek station to recover and call once again for help.

A telegraph message was sent to Robert Nelson of Richmond to take his omnibus out the Lancaster Road to Harris Station to pick up the passengers and return them to town. A work train was called from Richmond Junction to repair the damaged track during the night. Finally, the original engine got back to the train and pushed it (mules and all) backwards to the Richmond station, arriving at 4 a.m., about 22 hours after it had left. In a couple of hours the train, the crew, and the conductor were all ready for the regular morning trip. Roberts was heard to comment that his legs felt a little sore! 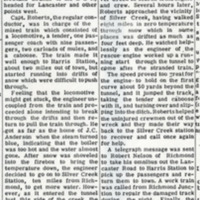