Madison Campbell (1823-1896) was a famous Negro preacher in Richmond and Madison County. I am indebted to his granddaughter, Mrs. Jasper (Ruth M.) Hill, for information on Bro. Campbell. Another grandchild still living in Richmond is Jordan Embry.

Campbell's autobiography was published in 1895 by the Paragraph Publishers, predecessors of the Daily Register. Bro. Campbell was born as a slave of Edly Campbell in Daniel Boone country between Joe's Lick Knob, Pilot's Knob, and Silver Creek. He was first baptized into the Methodist Church in 1842 and remained there until 1856 when a conviction that baptism by immersion was necessary and that falling from grace was a false doctrine led him to join the Baptists. He was sold once, but was freed in 1863. From 1858 until 1896 he served as pastor of the United Colored Baptist Church, now known as the First Baptist Church, Irvine Street. He named his successor, Rev. T.H. Broaddus, who was followed later by Welby Broaddus, who was pastor when the present large edifice was constructed. Rev. A.C. Goodloe is the present pastor.

The Negro Baptist Church was first constructed in Richmond on land bought from Tom Robinson in 1845. Thompson Burnam, Sr., was the first white trustee for the church. Edmond Martin was the first pastor, John S. Irvine was the third. Young Campbell made such a good impression on the congregation that Irvine was forced out and Campbell became pastor in 1858. Campbell also pastored many country churches. He was at the Kirksville church from 1873 until 1896. Other churches where he pastored include New Liberty, Mt. Pleasant, Otter Creek, Mt. Nebo, and Goodloe's Chapel. When a Lexington church began to Practice open communion, Bro. Campbell led in the formation of the new Mt. Pleasant District Association, made up of churches south of the Kentucky River.

Rev. Campbell’s first wife was named Polly and they had 14 children—John, George, Green Berry, Madison, Henry, Clay, Marshall, William, Nancy Jane, Parthenia, Lucy, Maria, Julia Ann, and Mollie (Mrs. Hill’s mother). Polly died in 1894 and shortly thereafter he married a widow, Mrs. Roxana Moberly. In 1892, Bro. Campbell received the Doctor of Divinity degree from a Louisville seminary. He was a Republican from Civil War days, having changed from being a Democrat after President Lincoln freed the slaves.

Hon. Curtis F. Burnam wrote the introduction to Dr. Campbell's autobiography. In it he said, "--he has departed himself as a good citizen and a consistent minister of the Gospel. His influence has been for good, and he has commanded the respect and esteem of all his acquaintances, white and black." No finer testimony could be asked. 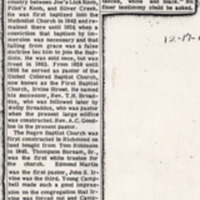