In preparing the special Woman's Edition of the Kentucky Register to raise money for the Pattie A. Clay Infirmary back in September, 1897, an article was written which contained several ladies' replies to the question, "What would you do if you were mayor of Richmond?"

Most of the replies indicated a general concern with how messy and unsanitary the town looked. "I would have all the streets cleaned," said Mrs. L.P. Todd; similar answers were given by Mary Spencer Smith and Mrs. T.D. Chenault. Mrs. David Chenault replied, "I would utilitzet he loafers in cleaning the town."

Mrs. I. Shelby Irvine and Mrs. Anne Waters would have seen to it that the weeds along Main Street were cut. Mrs. J.D. Stouffer declared, "I would have the weeds cut along Breck Avenue; the pig path we now have to follow being too narrow to accommodate the prevailing style of skirts without injury to same."

Some of the ladies were more concerned with the condition of the streets. "I would put some rock directly in front of my door," replied Mrs. Lizzie Shackelford. Mrs. G.W. Pickles indicated that if she were mayor she would condemn the street railway, referring to the mule-drawn streetcars which moved on tracks up and down Main Street during the 1890's.

Mrs. James Burnam declared that if she were mayor she would have all the gates on Main Street swing in, revealing to us that in those days just about everybody had a fenced-in yard and that many of the yard gates were left hanging out into the street, making the pedestrians and the horse-drawn vehicles go around them. Just imagine what would happen if someone left a gate swung out into Main Street today.

Two of the ladies were concerned with cleaning up some of the bad habits of some Richmond people. Mrs. W.B. Smith stated that if she were mayor she would "remove every drop of whisky from Richmond." Miss Belle H. Bennett said she would "fine every man $5 who spit tobacco juice upon the sidewalks."

"If I were mayor," said Minerva Parke Phelps, "I would fold my hands and enjoy my position as mayors of the past have done." 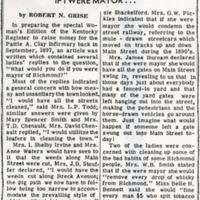