A recent column discussed a hanging on the courthouse square carried out by the Ku Klux Klan. Further research has disclosed the name of the victim and the fact that he was a Klan member.

The Ku Klux Klan was formed in Madison County on the banks of Jack's Creek near the Kentucky River to wreck revenge on certain cattle thieves who had killed a local squire while stealing his herd near Muddy Creek. The Klan issued white robes on that night in August 1868 and shortly after that 100 Klansmen rode 25 miles through the county and streets of Richmond to demonstrate their power. Soon thereafter bodies of bandits and others who had invoked the Klan's ire began to be found around the county with the initials KKK on a note attached to their clothes. Which brings us to the hanging.

Frank Searcy, a lone bandit who stole complete rafts of marketable goods, managed to join the Klan. One night he shot a man in the back after a quarrel. He then tried to cover up his crime by placing the KKK sign on his victim's coat. Twenty-four hours later the Klan dispensed its justice. Twenty white robed riders entered town and hanged Searcy to a locust tree in the front yard of the courthouse near the sidewalk.

The note attached said, "Don't cut him down until tomorrow. KKK."—And no one did until high noon on the next day.

This episode of rogue justice caused the disbanding of the local Klan. Many of the Klansmen decided that justice was better dispensed by the sheriff and the courts. And so one midnight in 1871 at Newby the Ku Klux Klan of Madison County was disbanded and dissolved, and passed into history. 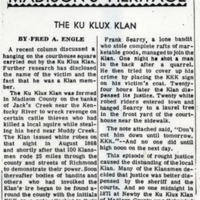