Berea traces its beginnings back to the old Glade Church House where John G. Fee, under the sponsorship of Cassius M. Clay, organized an anti-slavery church out of which grew the village and college named Berea, because the people "received the word with all readiness of mind" -- Acts 17:11.

Formal government began in Berea in 1890 upon the passage of an act by the General Assembly incorporating the town. Thus from Fee's beginning in 1853 until 1890 Berea existed an unincorporated village. In 1896 John L. Gay was appointed clerk of the board of trustees and he later served as mayor of Berea for over 40 years. In 1908 Berea had a population of 1,224 persons and was reclassified as a fifth class city.

The city of Berea has been very closely tied to Berea College, Fee, of course, founded both. In 1885 the community built a one room district school. The first teachers were William E. Lincoln and Otis B. Waters. Another early teacher was Rev. J.A.R. Rogers. In 1859, Berea College was founded with an interracial basis. The Civil War intervened and it was not until 1869 that freshmen were accepted on the college level, college preparatory being in use before that time. In 1873, the first A.B. degrees were granted. In 1904 the Day Law was passed in Kentucky prohibiting the mixing of races in private schools as well as public. Many city people backed this law, the college opposed it. The college thereafter set aside funds to assist in the establishment of Lincoln Institute, a school for Negroes, near Shelbyville. The law was changed again in 1950 and Negroes were readmitted to Berea College. The famous Hutchins family has been very closely connected with the college over many years.

While hesitating to mention business firms, I believe it safe to state that Churchill Weavers is Berea's most famous commercial venture. The college crafts and its Boone Tavern are also nationally famous. Until recently two high schools operated in Berea -- Berea High and Berea Foundation (the old Academy) but they merged in 1969 into the Berea Community Schools. 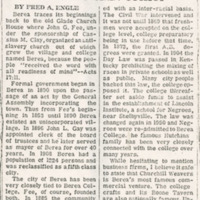