Business at End of Civil War

Business at End of Civil War

In the months following the end of the Civil War in 1865, business in Richmond was more or less back to normal. With the exception of reports of nearby raids by John Hunt Morgan's men, there had been no military excitement here since the aftermath of the Battle of Richmond in August, 1962.

From the Weekly Messenger, published for a short time in 1865 after suspension of operations during the war, we get some interesting information.

Francis House, operated by John N. Mize, had been "recently repaired and refitted," and his table supplied with "the best our market affords." His bar served liquor of various kinds and cigars and chewing tobacco. In his stable, Mize advertised, "the transient customers can have their stock well cared for...on the most satisfactory terms." The stage coach arrived every morning to pick up and deliver passengers and baggage.

Webster House, also on Main St., was "recently repaired and repainted," and claimed to be "presenting to the traveling community every comfort usually found in inland hotels."

Drug stores in 1865 appeared to carry as wide a variety of merchandise as modern ones. W. A. Yants' Corner Book and Drug Store sold not only medicines and school and gift books, but also stationery, tobacco, cosmetics and food. A Dr. Riddell operated a sort of dispensing medical service department, filling prescriptions and taking "calls in the line of his profession in town or country." Among the diseases treated were gastrodynia, habitual costiveness, diseases of females, debility, and liver complaints.

The H. C. Nain Drug Store, on Main Street opposite the courthouse and diagonally across the intersection from the Francis House, sold patent and prescription medicines, window glass, coal oil, "green and black tea," tobacco, English soda, liquor and wines.

New excitement came to Richmond during August, 1865, in the form of Dan Casello's circus, claimed to be "the largest and best appointed." After "a grand and imposing procession" including a brass band in a chariot and an ornate carriage once owned by Queen Victoria, performances were held twice daily. Admission was 50 cents, and 25 cents for children.

Some of the stores had such a general line of merchandise that they would be hard to classify. John G. Taylor on West Main sold dry good, groceries, hats, boots, currier's goods, lamps and notions. I. D. Smith had photographs of Lincoln, Johnson and Grant; "powder, shot and caps;" coal oil for $1.00 a gallon; and "Red Bug Poison and Rat Exterminator."

Elias Kurtz announced that his furniture store had received a new shipment of patented coffins including one wrought iron, one terra cotta finish, several "with full glass tops" and one "deodorizing coffin." Daly and Krell’s Marble Works gave public notice that they had "the most chaste and original designs," and that they could execute statuary and bust from photographs.

Some last elements of the war were to be found in the notices that James Grubbs of Madison County was sentenced to three years at hard labor as a confederate guerrilla, and that James B. McCreary (later governor) was making a trip to the South to arrange for a collection of claims due Madison County citizens. 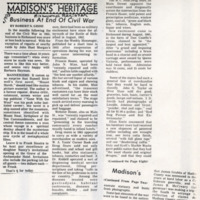