With a population of nearly 7,000 inhabitants, Richmond -the only urban community in Madison County - presents an ensemble of the county's richness within its city limits.

"Richmond is well suited and situated for additional industrial developments of moderate size. Due to its proximity to raw materials, coal outlets and markets to the north and east are open.

"Excellent opportunities exist for a canning factory, a meat packing enterprise and a fruit and vegetable market, according to the report. Possibilities favorable to the development of potters clay, of which Madison County has an abundance, manufacturing of brick and tile and exploitation of fluorite and calcite deposits appear to warrant consideration.

"Recent increase in all lines of business is reflected in the decreasing number of unemployed in the county as a whole. From December l, 1933, to May l, 1934, less than 10 percent of all families in the county were on relief as compared to 15 percent for the state as a whole. Expenditures for direct relief and relief work in Madison County from November 1, 1932, to May 1, 1934, were between $6 and $8 per capita, as compared with a state average of $9.49. These figures indicate that Madison County suffered less from the economic depression than the average Kentucky county.

"Revealed in the summary, business has swung upward to a decided higher level this year as compared with corresponding periods in the past. Merchants appear optimistic as to future trade prospects.

"At the present time there are about 25 lawyers and 37 doctors practicing in Madison County, with most of these men having offices in Richmond. These professions report a large volume of business with collections much better than they have been at any time during the past few years, the survey disclosed.

"Two outstanding newspapers furnish facts both foreign and local to Madison County-the Richmond Daily Register, a daily with large circulation, and the Madison County Post (formerly The Pantagraph), a weekly.

"Surrounding Richmond, a wealth of natural and scenic beauty meets the eyes of visitors and natives. Nationally known for the panorama seen from Dixie Highway 25 North of Richmond, it shows in incomparable splendor the beautiful palisades of the Kentucky River below.

"In the southern part of the county, Berea, (population 1,827) offers Berea College as a showplace where constructive work is being done among the underprivileged mountain people. It would seem to the advantage of Madison County to give more thought to the possibility of developing and advertising the historic sites and scenic beauty which it possesses as added attractions for these visitors, and to increase tourist trade, the survey suggests.

"Traversing Madison County are 80.3 miles of highways, being maintained by the state highway department (as of April first, 1935.)

"The influence of college life in Richmond and Berea has increased cultural value in this county to above par." 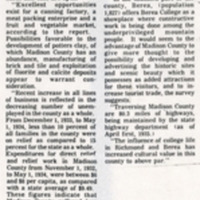