The September 10, 1937 issue of the Richmond Daily Register featured an article concerning the New Berea postoffice, and it read as follows:

"When Berea's new $53,000 postoffice is dedicated Saturday, the building will be more than a symbol of the nation in this small mountain town—it will be a new market upon an old landmark. On the same lot that the new postoffice has been erected, the original home of John G. Fee, founder of Berea College, once stood when Berea was nothing more than a wilderness.

"To the rear of the new postoffice building is an old stone marker that bears mute evidence that much of the early planning of the school that was later to become famous took place there. The inscription on the stone reads as follows: 'On his spot in the study of John G. Fee were held the first meetings to plan with prayer and faith Berea College 1855-1859. First signers of the constitution: John G. Fee, John G. Hanson, Jas. S. Davis, Thomas J. Renfro, John . R. Rogers, George Candee, William Stepp, John Smith.' Fee's house was a small four-room cabin that was torn down later years after a new home was erected a few hundred yards from the site of the original home. The later building is still standing and is being used as a dwelling by college workers.

In the declining years of Mr. Fee's life he gave the lot of his original home to his granddaughter, Hallie Embree, who later sold it to Mrs. S.R. Baker, from whom the government purchased the lot for a postoffice site on September 26, 1935. Old-timers say that the lot was a part of the ten acres given to Mr. Fee by Cassius M. Clay, when Mr. Fee conceived the idea of establishing a school in this section.

The new building to house the postoffice department is an attractive brick structure complete in every detail. Steps leading to the lobby, flanked on each side by a wrought iron standard lamp, are made of stone granite brought here from Stone Mountain in Georgia. The walls and floor of the lobby are made of fine and small tile. To the right of the lobby is the postmaster's office and from the office is the entrance to the inspector's room, sometimes called the 'cat walk.'

"The main room of the office is furnished with modern equipment for mail handling. The walls and ceilings are of pure white, giving the greatest amount of light. The floor is made of 10 inches of concrete with an oak floor top. To the right of the room is a large fireproof vault. Back of the room are two heavy doors equipped with heavy spring-bumpers for the trucks as they are pushed in-and out of the room. Approaching the building on the west side is a wide driveway with a large area for the mail trucks. A 40-foot flag pole stands to the west of the building.

"As the structure is a far cry from the one that originally stood there, so are the postal facilities and service far removed from that of those pioneering days when the mail first came to Richmond, the nearest railroad point and was then transferred to Berea by wagon or horseback. The mail hack carried passengers into Berea from Richmond by the way of Bobtown and Blue Lick. Among the first mail hack carriers over the Berea-Richmond route were Elzie McCollum and J.W. Van Winkle. In 1882 the Kentucky Central Railroad was put through Berea to Livingston and Berea experienced her first receipt of mail by train.

"J. L. Gay, mayor of Berea since 1910, speaking at the cornerstone laying of the new postoffice March 24 this year, stated: "The early citizens of Berea in the period immediately following the Civil War got their mail at Johnson's Shop, about a mile and a half north of Berea on what is now U.S. Highway 25, near the Silver Creek bridge. Schyler Johnson, blacksmith by trade, was probably the first postmaster. According to U.K. Richardson, one of Berea's oldest citizens, Johnson used a roll-top desk much to put up the mail that came to Berea.

"Mr. Gay stated that in about 1869 William Embree, a son-in-law of John G. Fee, was postmaster, the office being located in the store building near where the Industrial building on the Berea College campus stands today. The building was later destroyed by fire.

"It was during the term of L.C. Adams on Jan. 5, 1924, that the most destructive fire ever to hit Berea destroyed the postoffice. Almost the entire business section of West End Berea was wiped out in zero weather. The fire broke out from an overheated stove in a department store.

"Today, the Berea postoffice is the distributing point for 95 postoffices, the farthest being Goose Creek in Clay county. Three rural routes are maintained with the following carriers: Jesse Taylor, C.H. Todd, and Ledford Campbell. Mail leaves Berea by car and truck and from other branch offices it is carried by wagon and, in some instances by horseback, into remote sections of adjoining counties." 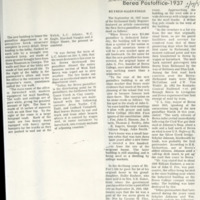