Amid floods, epidemics and shoot-outs, it seems that once or twice every generation a large part of Richmond's business district would burn down. The block on the south side of West Main between Second and Third was largely destroyed by fire in the early morning hours of Aug 31 1887.

The flames apparently started in the W.W. Pigg & Son livery stable, for the cry of fire was first voiced by Joe Pigg who had been asleep in the stable. Joe, who suffered the loss of nearly all his clothing, was able to escape with minor burns while the fire consumed seven horses, 15 vehicles and a lot of harnesses and hay.

The fire department's two chemical engines were brought around to Main St., but they were no match for the conflagration which soon spread to the buildings on both sides. The flames spread to Covington Arnold & Bro. grocery, then Shackelford, Gentry & Co. hardware, Neff s produce house and Douglass butcher shop, working its way toward Second St. From the livery stable the sparks and intense heat started flames in the New Opera House and Green's opera house at the corner.

So intense was the heat that for a while it was feared that the buildings across Main St. would catch fire, but the wind came up from the northeast, blowing the flames toward the backs of the already burning buildings.

By 4 a.m. the fires were under control but not by any means out. "If the city had had a steam engine to pump water,” moaned French Tipton the Climax editor, "we would have lost only the stable, Neffs, Douglass' and the new opera house." Altogether the loss was figured to be about $60,000 with only half covered by insurance, Covington Arnold & Br.o and Shackelford, Gentry & Co. were the hardest hit, each losing at least $12,000.

Morning dawned on the strange sight of that block of Main in smoking ruins and the street almost completely filled with a jumbled mess of burned and water-soaked merchandise and fixtures which had been hastily carried from the buildings just ahead of the flames.

The bank and the IRS office were open the next day, somewhat gritty and soggy but ready for business. Other concerns found temporary quarters and vowed to rebuild again.

The two opera houses were not rebuilt. A group of business leaders purchased those two adjoining lots and began to erect a large fine hotel. Two years later Richmond was celebrating the opening of the Glyndon Hotel. 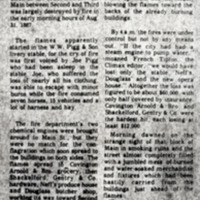